(St. Louis, MO, June 29, 2020) – Monuments can be powerful, and even controversial, reminders of a person, place, or event in history. When monuments start to show signs of wear-and-tear and weather damage and need to be restored to their original conditions, or new monuments need the expertise of a specialty contractor to construct, customers call Western Specialty Contractors.

Throughout its 100+ year history, Western Specialty Contractors has worked on some of the nation’s most recognized monuments and memorials, such as the Lincoln Memorial Reflecting Pool in Washington, D.C.; The Gateway Arch in St. Louis, MO; Staten Island September 11th Memorial in New York City, NY; World War II Veterans Memorial Globe in Springfield, IL; and the Lincoln Receiving Vault in Springfield, IL.

Whether the memorial or monument is made of stone, concrete, or metal, they are all subject to weathering and damage over time. Through proper, routine maintenance, monuments, and memorials can be returned to their original condition and protected from future damage.

In the case of graffiti, Western uses high-performance, environmentally friendly technology to safely and effectively remove spray paint and its shadows from concrete, brick and natural stone without damaging their delicate surfaces or changing their appearances.

“Each memorial project is unique and requires a special set of restoration skills and care. Repairing spalling and cracking concrete, installing appropriate waterproofing and treating rusting metal consistently will go a long way toward boosting a monument’s longevity. One aspect that remains consistent is Western’s dedication to respecting and maintaining the historical integrity and significance of the memorial or monument that has been entrusted to our care,” said Ben “Butch” Bishop, Jr., CEO of Western Specialty Contractors.

In 2004, Western assisted in the design and installation of granite victim plaques for The Staten Island September 11th Memorial in New York City. The memorial, designed by architect Masayuki Sono and titled, “Postcards”, is constructed of two, 40-foot wing-like fiberglass walls, each with a 30-foot long window displaying the face profile and name of each victim.

Western was responsible for overseeing the selection and production of granite in Victoria, Brazil and Barrie, VT that would make up the 274 granite plaques. Each victim profile was designed by the architect and family members and downloaded to an electronic file that guided a waterjet machine over the granite to create each victim’s profile and name inscription. Western’s crew took great care in joining these special plaques to the memorial’s fiberglass walls. Over 3,000 family members and friends of the victims, city officials and a cast of devoted workers dedicated the memorial, which was awarded the New York Construction “Best of 2004 Annual Award.”

Western Specialty Contractors completed a project in 2017 to restore and waterproof the roof of the Museum of Westward Expansion located underground beneath the iconic Gateway Arch on the St. Louis Riverfront.

The next phase of the project involved waterproofing the 42,000 SF horizontal lid and 37,000 SF vertical walls of the museum addition. Additional waterproofing of the north and south museum entrances and each Arch leg was also completed. The museum was largely operational during construction and a lot of the time Western crews were working over occupied space. Western sequenced the removal of existing roofing material so that they could remove, clean and install new roofing material daily to keep the museum dry during construction.

In 2015, Western Specialty Contractors was tasked with repairing and re-coating the World War II Illinois Veterans Memorial Globe in Springfield’s historic Oak Ridge Cemetery. The exterior of the concrete Globe was showing signs of wear, with cracking and spalling concrete evident near the top of the memorial where a previously applied protective coating was flaking off.

Western crews removed damaged areas and repaired them with a polymer-modified concrete repair mortar. The shapes of the continents and the Globe's longitude and latitude lines were reformed and finished, under the watchful eye of the artist, to match the existing profile. Crews wet-abrasive blasted the Globe's surface to remove any remaining coating and provide profiling for the new coating.

After the surface had dried, Western applied a Sherwin Williams Loxon Concrete Primer and two coats of ConFlex XL Elastomeric Coating in flat white to match the original color.

In 2015, Western Specialty Contractors restored the historic receiving vault in Springfield, IL that once held the bodies of assassinated President Abraham Lincoln and his son, Willie. Constructed in the 1860s, the stone and marble vault had major deterioration due to decades of water penetration.

Western crews repaired the vault’s walls using a system of low cement ratio mortar and brick infill in areas where the brick had deteriorated away from the wall. After infilling the voids in the walls, Western applied a layer of low cement ratio mortar to the entire wall surface to create a smooth surface to accept the bentonite sheet waterproofing. Western used stone fabrication methods to repair two serpentine retaining walls that extended outward away from the vault entrance.

The restoration project was completed on May 1, 2015 in time for commemoration and funeral reenactment ceremonies marking the 150th anniversary of Lincoln’s funeral.

The Lincoln Memorial Reflecting Pool was constructed in 1923 following the dedication of the Lincoln Memorial. The pool is over a third of a mile long, 167 feet wide and 30 inches deep in the center. In 2004, Western waterproofed the pool, which had begun to leak, and cut-out and re-caulked joints with urethane grout and silicone sealants.

Family-owned and operated for more than 100 years, Western Specialty Contractors is the nation’s largest specialty contractor in masonry and concrete restoration, waterproofing, and specialty roofing. Western offers a nationwide network of expertise that building owners, engineers, architects, and property managers can count on to develop cost-effective, corrective measures that can add years of useful life to a variety of structures including industrial, commercial, healthcare, historic, educational and government buildings, parking structures, and sports stadiums. Western is headquartered in St. Louis, MO with 30 branch offices nationwide and employs more than 1,200 salaried and hourly professionals who offer the best, time-tested techniques and innovative technology.

ESP status is given out annually to a small percentage of Carlisle’s most dedicated and professionally-minded applicators. Selection into this elite group is based on a company’s volume and quality of workmanship of Carlisle single-ply roofing systems.

The St. Louis Roofing Branch has installed and warranted over 12.8 million square feet of Carlisle single-ply roofing systems and has completed 563 Perfect 10 installations as judged by Carlisle’s final inspection process.

“Western Specialty Contractors prides itself on using the highest quality roofing materials and delivering a quality roofing installation every time. Realizing this recognition from Carlisle is further testament to Western’s roofing expertise and dedication to quality workmanship. We are proud to have been selected for this prestigious award.”

Established in 1998 as a means to recognize Carlisle Syn Tec Systems’ most loyal and dedicated authorized applicators, the Excellence in Single-Ply award has become one of the most recognizable and prestigious achievements in the commercial roofing industry. Inclusion in ESP is an acknowledgment that a contractor is an industry leader. As membership in this exclusive group has grown throughout the years, one thing has remained the same – the bond between Carlisle and all of its ESP contractors is solidified by a mutual commitment to roofing excellence.

“Only the most accomplished applicators achieve ESP status, a designation that provides customers with confidence that they have partnered with the very best in the industry,” according to a Carlisle SynTec Systems statement.

“Only the most accomplished applicators achieve ESP status, a designation that provides customers with confidence that they have partnered with the very best in the industry,” 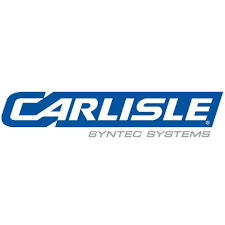 Family-owned and operated for more than 100 years, Western Specialty Contractors is the nation’s largest specialty contractor in masonry and concrete restoration, waterproofing, and specialty roofing. Western offers a nationwide network of expertise that building owners, engineers, architects, and property managers can count on to develop cost-effective, corrective measures that can add years of useful life to a variety of structures including industrial, commercial, healthcare, historic, educational and government buildings, parking structures, and sports stadiums. Western is headquartered in St. Louis, MO with 30 branch offices nationwide and employs more than 1,200 salaried and hourly professionals who offer the best, time-tested techniques and innovative technology.

Constructed in the mid-1920s, the Hilton Orrington Parking Garage is a stand-alone parking structure located adjacent to the Hilton Orrington Hotel in Evanston, IL. Its interior concrete had degraded due to the corrosive action of chlorides, such as salt, and natural life-cycle deterioration to the point where falling concrete was posing a safety hazard to visitors. 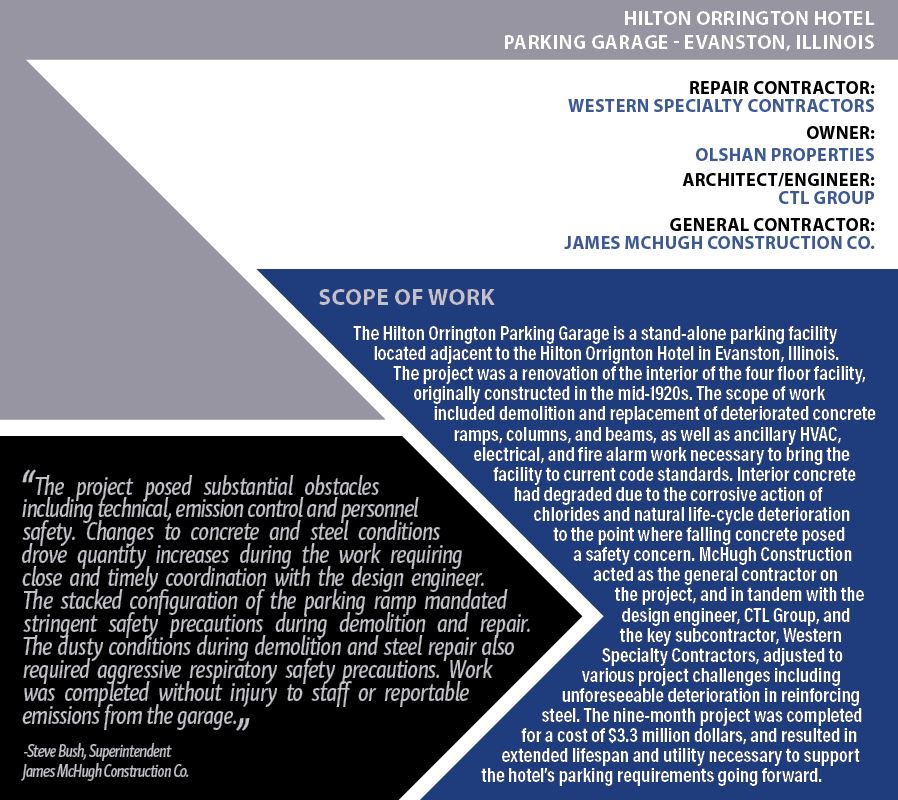 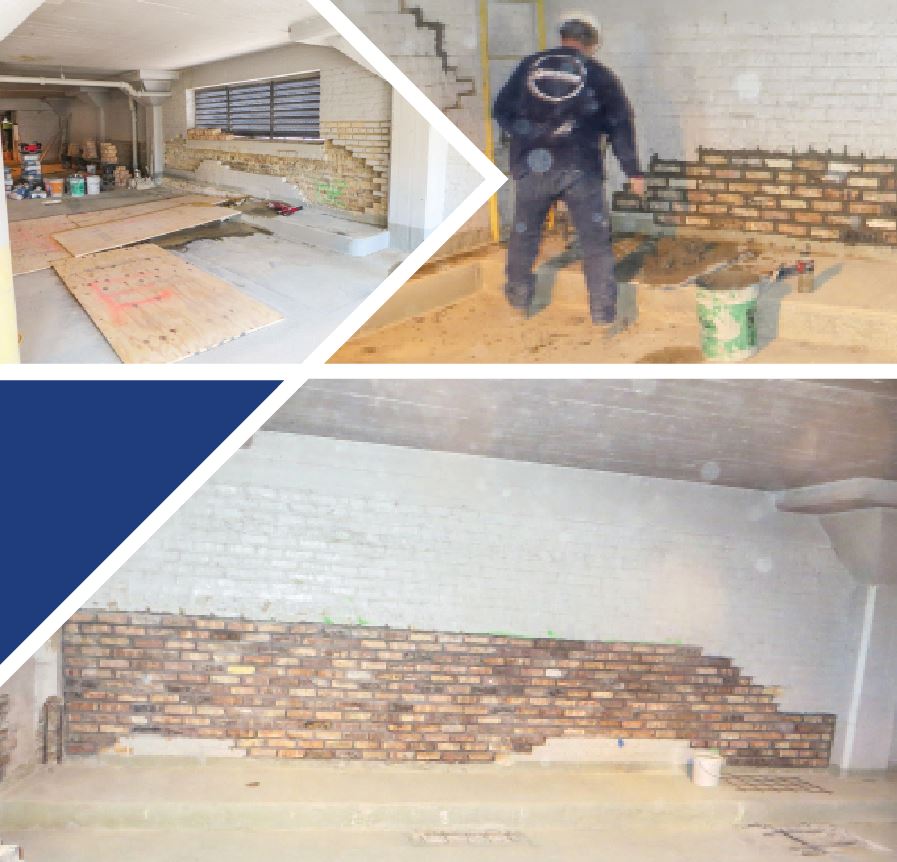 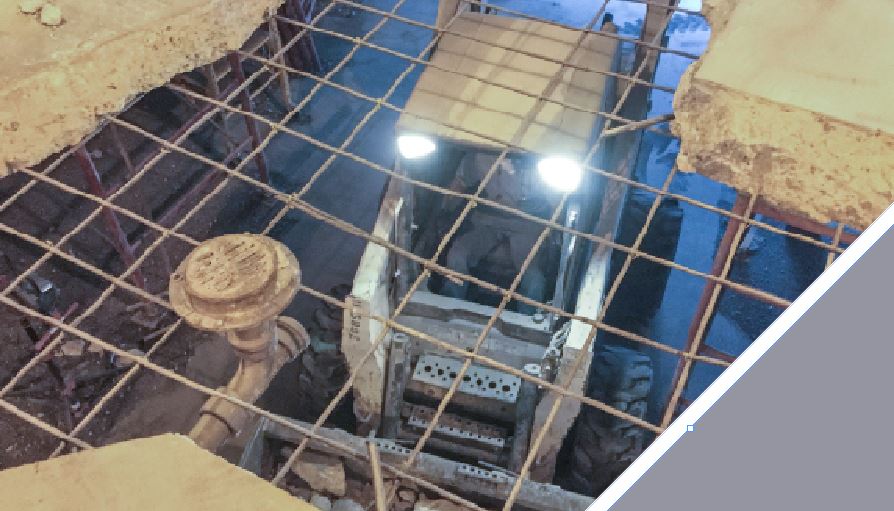 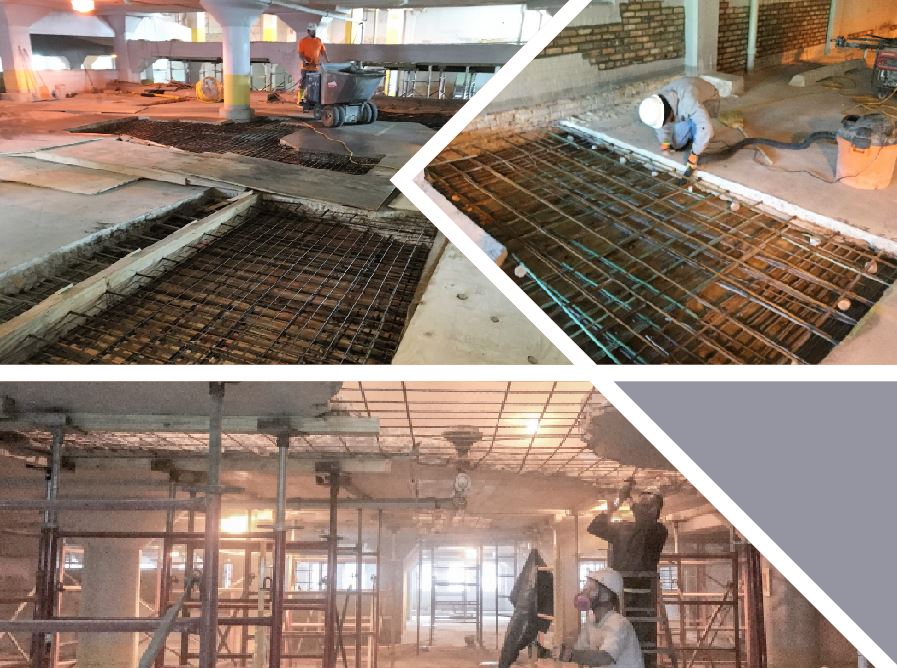 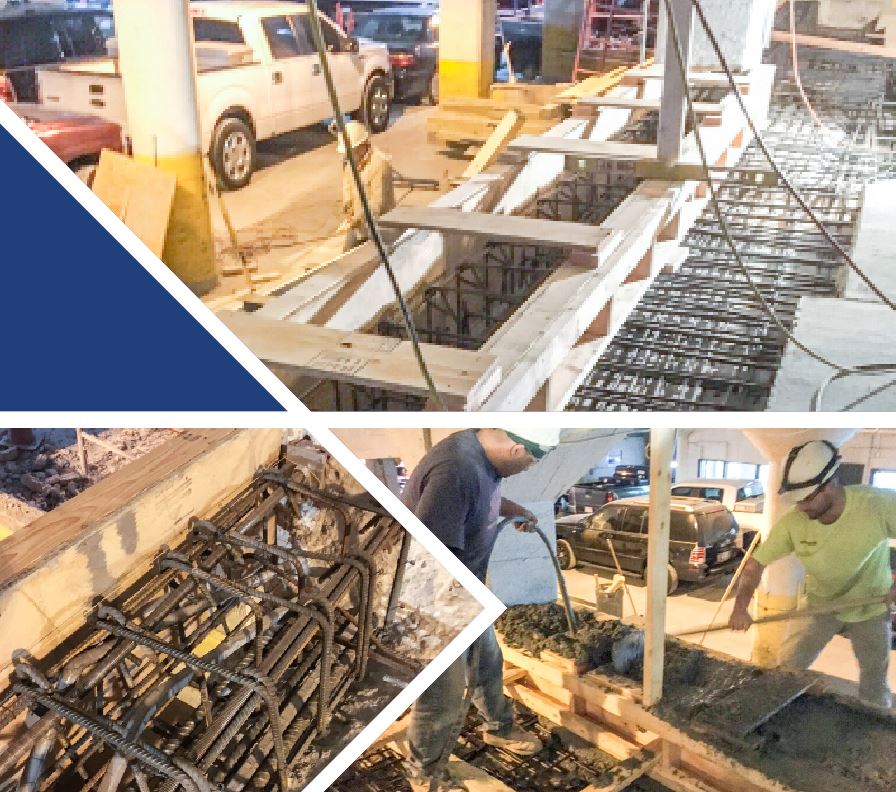 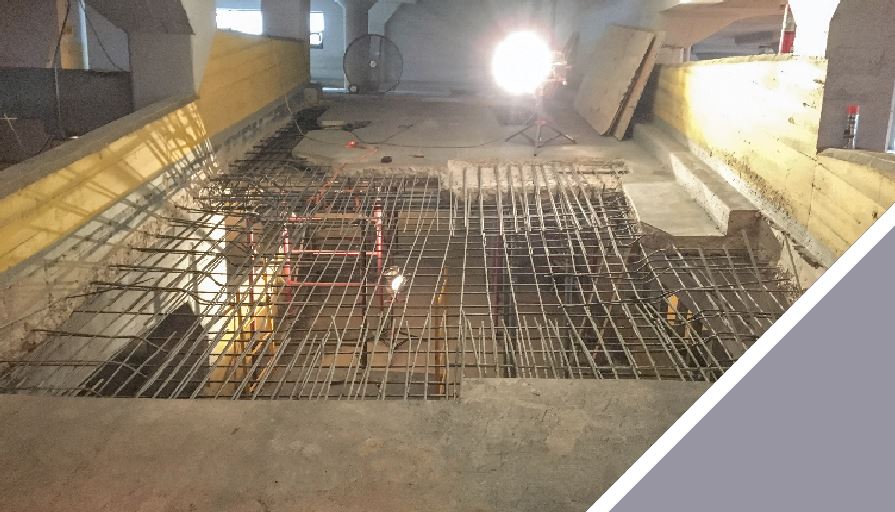 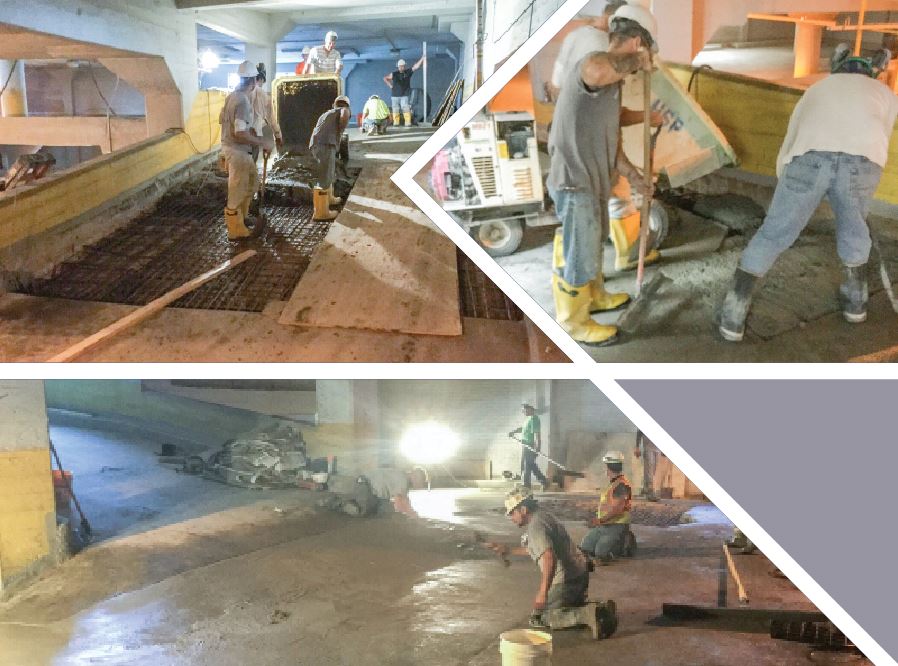 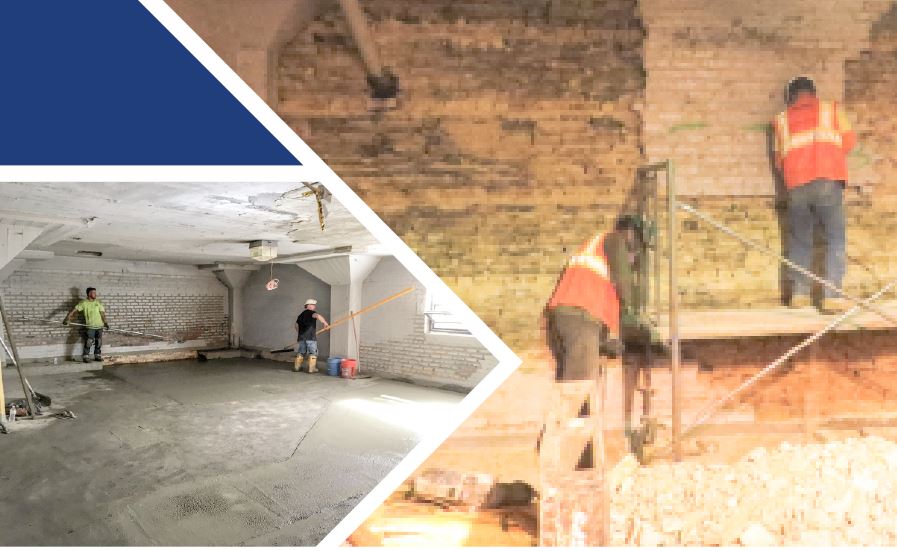 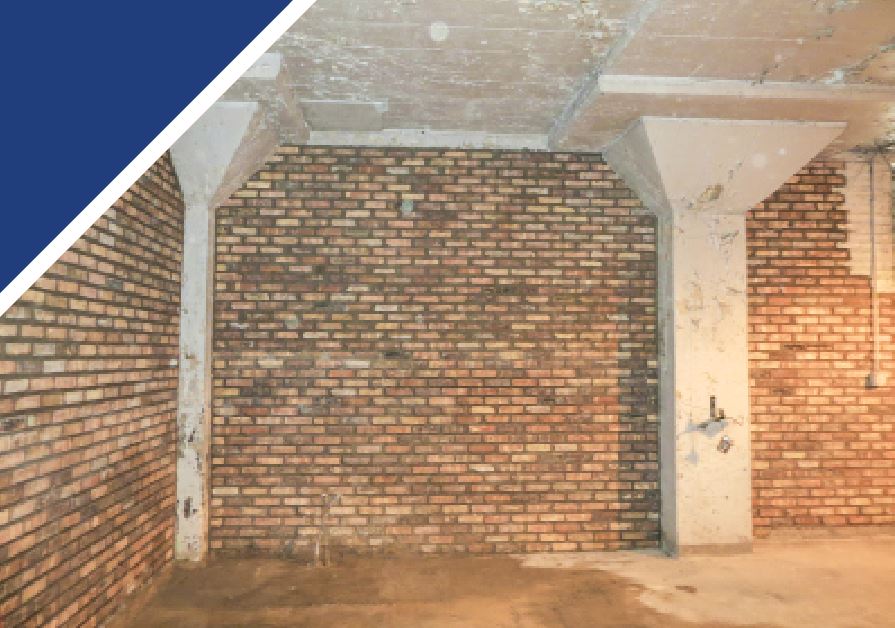 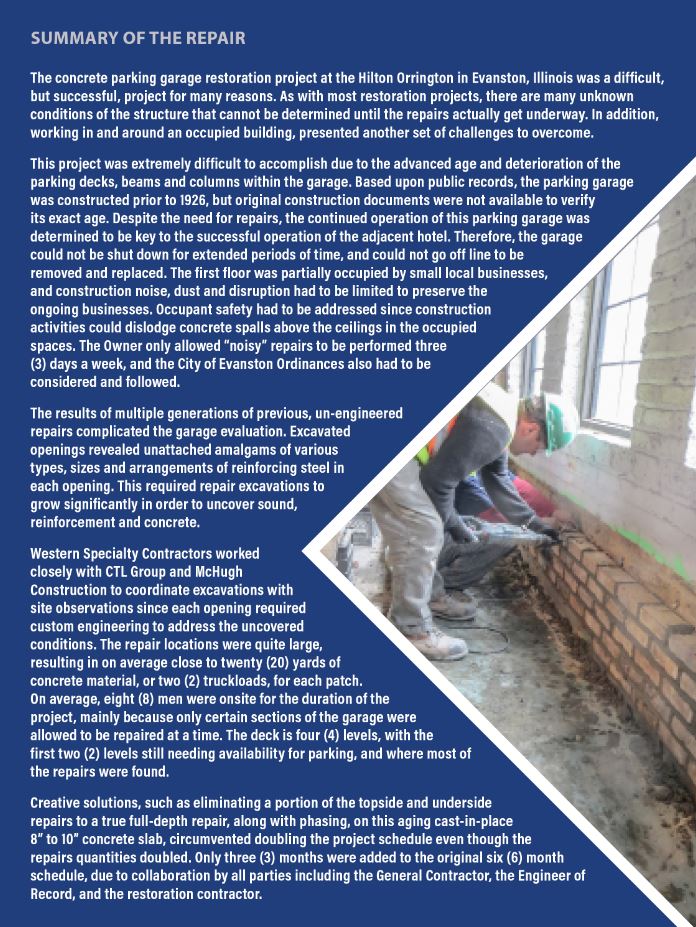