The International Concrete Repair Institute (ICRI), the only association devoted solely to concrete repair and restoration, recently announced the winners of its second annual 40 Under 40 Award (www.icri.org/page/2021-40_under_40). Western Specialty Contractors is proud to announce that Minneapolis Branch Sales/Project Manager Tony Marchiafava, 29, and NYC Metro Branch Sales/Project Manager Derek Robertson, 29, were among the announced winners in 2021.

As Sales/Project Managers, Marchiafava and Robertson identify and execute new business development opportunities, as well as direct and manage project development from sale to completion. They also develop and communicate project expectations to the project team and proactively manage the project to meet established goals.

The prestigious award recognizes 40 individuals under the age of 40 who exemplify dedication to the concrete repair industry. A peer-nominated award, the ICRI 40 Under 40 recognizes individuals who have demonstrated their commitment to continued professional growth, high potential for continued success in leadership roles, and a strong passion for – and commitment to – the mission of ICRI.

“We are so proud of our ICRI 40 Under 40 honorees,” said Western COO Tom Brooks. “Both of them started as interns at Western, then were hired on full-time. They have each demonstrated what it takes to be successful in the industry and have exhibited their dedication to our organization and to the mission of ICRI. Our team congratulates each of them on a job well done.”

He has a Bachelor of Science in Construction Management from the University of Wisconsin-Stout and has been involved with ICRI since 2014. He currently serves as Membership Director for the ICRI Minnesota Chapter.

Marchiafava said the subject of concrete grabbed his attention in college, starting him on his career path.

“Concrete is so durable and so versatile and it can be molded into virtually any shape that strengthens over time! How could you not be interested? To get the opportunity to maintain and repair this material has been both educational and enjoyable. Every project has its differences and with that comes opportunities to enact new means and methods; I enjoy the change and challenge,” he said.

When not working, he enjoys spending time with his wife and two daughters, golfing, fishing and being outdoors.

He has a Bachelor of Science in Construction Science and Management from the University of Texas at San Antonio. For the past three and a half years, he has served as Vice President of the ICRI Metro New York Chapter and is currently the organization’s President-Elect.

Robertson said he knew when he got into college that he wanted a career related to either engineering, architecture or construction. During his freshman year, he was exposed to Western and the construction restoration industry through job fairs and networking events and knew then that he had found his calling.

“I love the job for a few reasons. First, it has given me the opportunity to work with so many brilliant and talented people from all aspects of the industry. I love the interaction and team mentality that goes into what we do,” he said. “It takes a lot of us to get what we want to be accomplished! Second, I love the challenge of having to figure out how to get our jobs done. New York City is an incredibly tough market to master, but there is a great sense of fulfillment when we are able to successfully execute a project.”

Robertson has a one-year-old yellow lab named Beanie. In his spare time, he enjoys traveling/sightseeing, fishing, and live music.

David Grandbois, Assistant Branch Manager of Western’s Minneapolis Branch, was honored with the ICRI 40 Under 40 award in 2020, the award’s inaugural year.

Family-owned and operated for more than 100 years, Western Specialty Contractors is the nation’s largest specialty contractor in masonry and concrete restoration, waterproofing, and specialty roofing. Western offers a nationwide network of expertise that building owners, engineers, architects, and property managers can count on to develop cost-effective, corrective measures that can add years of useful life to a variety of structures, including industrial, commercial, healthcare, historic, educational and government buildings, parking structures, and sports stadiums. Western is headquartered in St. Louis, MO, with 30 branch offices nationwide and employs more than 1,200 salaried and hourly professionals who offer the best, time-tested techniques and innovative technology. For more information about Western Specialty Contractors, visit https://WesternSpecialtyContractors.com. 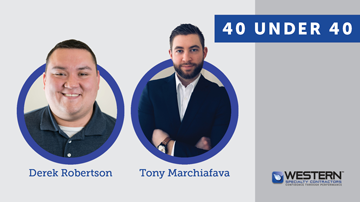